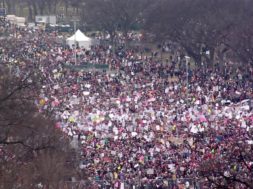 Facebook announced last year that they’ll be rolling out implementations to where companies and media can broadcast 360 videos live on their social media platform. And NBC News has just become one of the first companies to broadcast in this new live 360 video format.

Women’s March on Washington D.C. is taking place just one day after President Donald Trump’s inauguration. The protest serves to fight his agenda and support for women’s rights. The march is planned to move from the U.S. capitol to the Washington Monument. It’s been reported that there’s around 275,000 participants in this movement with millions of others protesting in other cities around the nation.

Hillary Clinton is one of the many advocates for this movement and march against the newly announced president of the United States.

Thanks for standing, speaking & marching for our values @womensmarch. Important as ever. I truly believe we're always Stronger Together.

She thanks the women around the nation for standing up for their beliefs and values for equal rights. There’s various other live feeds of cities displaying to show of strength in this protest.

The live 360 video feed on Facebook will definitely serve as a powerful tool in demonstrating a setting or scenery of events taking place such as the Women’s March on Washington. Look for more feeds such as NBC’s on displaying immersive experiences for the viewers.