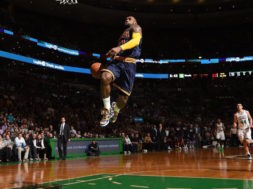 NextVR has been on a roll in delivering sporting events in 360 virtual reality. Now, they look to team up with the NBA to deliver games Live in 360 VR. The two companies have agreed to deliver one game a week in VR settings which means that you’ll have full access to players on the court every week.

The benefit of viewing a sporting event like basketball in 360 is the level of immersion and experience. With this technology you’re able to enjoy the game in a perspective that feels more intimate. You gradually build the sense of involvement with the game as you’re able to see in perspectives unfamiliar to traditional settings. You can see and almost participate with the crowd as their chanting for their teams.

The NBA games in VR will be available through NBA League Pass which starts at $199.99. This may be a steep price point for some but in essence, you get access to over a thousand games per season. For those that have purchased the pass, you must create an account with the NextVR app to stream the game in VR. You can use android VR devices such as the Daydream VR headset or Samsung Gear VR to view the content. NextVR has promised to include the Oculus Rift and HTC Vive later down the season.

NextVR will be putting cameras in multiple positions so you have the freedom to pick and choose where you want to be spectating the NBA game. This is a new style of broadcasting that’s never been done in 360 VR. You can try to stream out for free today by signing up for the preview trial with League Pass.