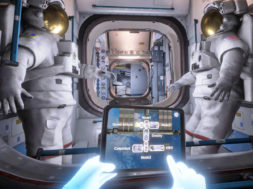 NASA is currently implementing VR for their astronaut training programs, after a successful partnership between NASA and Oculus created Mission:ISS, a consumer education VR experience aboard the ISS (International Space Center).

Mission:ISS turned out to be so realistic, NASA decided to develop VR programs to impart more lifelike training simulations in hopes that these experiences will better equip astronauts to deal with real life situations in space.

Mission:ISS allows Oculus users to explore the virtual space station like they are actually in Low Earth Orbit (LEO), dock incoming spacecrafts, go out on spacewalks and even perform mission-critical tasks like a real crew member.

NASA’s training SIM is being developed with Unreal Engine using both the Oculus Rift and HTC Vive headsets.

Unreal Engine’s “cutting edge graphics and physics simulations increase the sense of presence. The more realistic your training feels, the faster you can respond in critical real-world situations which could save your mission or even your life,” said ASA Software Engineer Matthew Noyes.

NASA ISS astronauts who have tried the SIM report it very accurately mimics the feeling of handling objects in zero G. The training includes simulated maintenance, letting you use the Vive’s control wand to grab tools and other objects aboard the ISS. To make the mixed-reality simulation of gravity even more immersive, the technology features ARGOS (active response gravity offload system), which is essentially a crane that flies astronauts around to simulate zero, lunar, or Mars gravity. This gives astronauts the tactile sensation of being in orbit.

Another seemingly small, but extremely cool/accurate feature VR recreates is “blooming” — the lag time it takes for users’ pupils to dilate while adjusting to see the stars in the the digital sky — which astronauts experience in space.

Prior to VR, NASA used physical mockups to train ISS astronauts. These standard training methods included Zero-G “vomit comet” airplane rides, neutral buoyancy (underwater) and other pricey and complex methods. VR has now become a new option, and additionally, this will allow a new networking component that allows astronauts from all over the world to train together despite geographic hurdles.

While this is still an incomplete NASA simulation, Noyes disclosed that they are also working on a public release. The idea would be to create both a public outreach product alongside an actual SIM, which could likely inspire (and train) young people to become astronauts. Thanks to VR, we are now able to put ISS crew in space, while they are still on Earth.