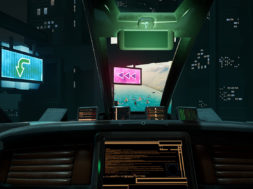 Movies such as Blade Runner always brought out a sense of mystery and imagination as we got to see inside a creative mind and just how far the we can all dream. OD1N Studios, an Australian based indie studio also wants to see how far they can push the boundaries with their upcoming VR game called N1NE: The Splintered Mind Part 1.

N1NE is a Cyberpunk narrative-driven game, which is being exclusively created for VR. The story takes place in the year 2099 where you play a resourceful detective named Avery Nine. As Nine, you will get to explore, interact, investigate, interrogate and solve your way through a series of suspicious murders in the ‘Real World’ as well as in virtual reality.

N1NE: The Splintered Mind follows his journey as Nine is forced into contact with the seedy underground, resistance movements, and the nefarious corporations in his quest to uncover the truth behind a mysterious murder.

In the video above you can see that you will have to solve clues and mysteries throughout the area. You will interact with other characters and start putting together the murder mystery.

N1NE is currently set to release some time in 2019 as it is still in its early stages. The OD1N team have stated that they are currently optimizing the game for a Rift version on top of the HTC Vive. But they would also be willing to create a Quest version depending on the interest level of the community.

tags: nine the splintered mind od1n studios
previous Watch How This Developer Made The Knuckles Index VR Controller Play A Song
next Tilt Brush Will Be Coming To Oculus Quest
Related Posts