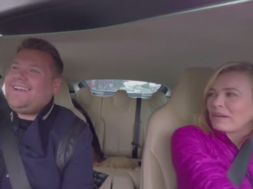 In the new show she has a similar concept of interviewing famous celebrities and high profile people in her unique quirky manner. Chelsea recently released a 360 VR video with James Corden. Chelsea picks James Corden up on her way to work to drop James off at CBS. And on their short drive together they talk about random personal subjects and have a fun time conversing with one another. Chelsea even touches on the famous celebrity Karaoke car ride skit from James Corden’s Late Late show. Chelsea asks if James wants to do some karaoke where James doesn’t really feel comfortable doing so.

The 360 video is quite short but does a great job in entertaining the viewer. If you’ve yet to see the two comedians on their talk shows, this definitely serves a great purpose in being an intro into their shiny personalities. This video can be watched in VR with the use of the Google Cardboard or Daydream VR headset.