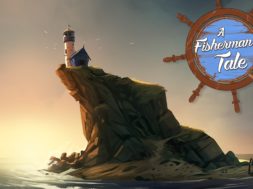 Vertigo Games has been busy of recent with the recent announcement of Skyworld coming to the PlayStation VR platform.

Playing with the incredible sense of scale unique to VR, Innerspace invented a unique VR gameplay mechanic based on the recursion principle. In a way, A Fisherman’s Tale is a co-op game – but instead of playing with others, you’re teaming up with multiple dimensions of yourself. Able to twist and bend your newfound, peculiar reality, you’ll be challenged with multi-dimensional puzzles on your journey to the core of an unusually tall tale.

What does it mean to be trapped inside a replica in an elusive virtual world? A Fisherman’s Tale at it heart is a story about breaking away from illusions to find truth. And who knows, you may learn something about yourself along the way.

In A Fisherman’s Tale you’ll play as Bob, a tiny fisherman puppet living alone in your lighthouse, tasked with a desperate mission – get to the top of the lighthouse to turn on the light before The Big Storm. Beyond breaking the laws of physics, this is a journey of self-discovery and emancipation, where you’ll uncover the truth at the core of an unusually tall tale.

A Fisherman’s Tale is set to release in January of 2019 for the PSVR, HTC Vive, Oculus Rift, and Windows VR HMDs.