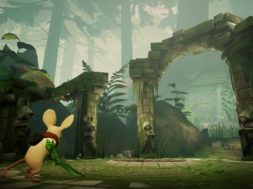 Polyarc has announced that Moss will be releasing on February 27th on PlayStation VR.

Moss is one of the more anticipated PSVR games to release this year by Polyarc studios. The game centers around a young heroine mouse by the name of Quill who ventures forth on a unique and exciting journey. While the game has been announced for some time now, Polyarc in partnership with PlayStation have released new gameplay footage of the upcoming game.

In the video you can see Quill moving around a beach surrounded by rocks and what appears to be a shipwreck. The area is interactive where you must climb and manipulate objects to move forward in the adventure. Also, you can see how detailed the background is in the game with the depth of animation.

The new gameplay footage also shows new enemies that you must defeat. You can either attack them or control them with your dual-shock controllers to run into each other. They seem to blow up once they make contact with one another.

The Polyarc team has also released a new iMessage sticker pack of Quill for iPhone users. You can download it today for $0.99 which will allow you to add animations on photos and iMessaging.

One of the cool things about Quill is that she knows how to use sign language. “I wanted to have her communicate with the player in more authentic ways, like how your friend might communicate with you,” said Rich Lico, Animation Director at Polyarc. “That led to things like using sign language, and having her represent how the player might be feeling — if the player is upset at something, she might kick that thing the player is upset about. You project who you are onto the character, but she also defines herself separately, and it helps build that realism.”

Since she can only squeak, I figured I'd play around with ways she can communicate with the player. Also a great perk for our deaf players. pic.twitter.com/BAiPc8CUMO

Polyarc has stated before that Moss will be released some time in February. Moss is available for pre-order today for $29.99. We don’t exactly know how much content will be in the game but we expect it to have a play-time of around 10 hours or so.