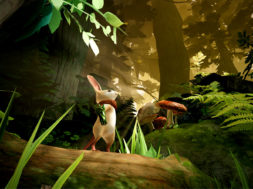 Moss is a single-player action-adventure puzzle VR game that’ll be exclusively launching on PS VR. The game features compelling characters, gripping combat, and captivating world exploration—and combines them with the exciting opportunities of virtual reality. Throughout gameplay, players build an extraordinary alliance with Quill, Moss’s brave new hero. Players not only guide Quill on her journey, but also reach into the world as their own character—their every action has impact.

We had the pleasure of playing Moss during E3 this year and it was quite evident that it would feature a strong story driven arc with a unique character named Quill who is a female warrior mouse. The story begins with a mysterious book in a grand, vaulted library that opens and transports the reader to a vast, magical world. Then you start your heroic adventure with Quill and journey through an amazing storyline.

Polyarc has announced that Moss will release some time in February 2018 for PlayStation VR. Fans in North and South America, Europe, UK, and Australia are all able to pre-order Moss today for $29.99 USD.

The fans who do pre-order the game will be receiving instant access to an exclusive dynamic PlayStation Theme and PlayStation Avatar featuring Moss’s hero Quill and her idyllic forest home. European fans pre-ordering Moss will receive their pre-order bonuses at launch this February.