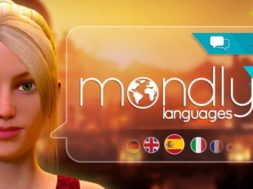 ATi Studios, the creators of Mondly, have announced the launch of Mondly VR for the Google Daydream platform. Previously winning 2017 Facebook “App of the Year” in EMEA, they provide a language learning curriculum that many around the world find quite useful.

“We realized the best way to teach languages would be to create an immersive experience that replicates real life scenarios and conversations. VR gives us the best opportunity to do this,” said Alex Iliescu, CEO of Mondly. “From our experience, the biggest things that keep people from actually speaking and using new languages are fear and lack of life-like practice. Mondly VR overcomes these barriers and quickly gets learners comfortable and speaking in real life situations. We’re filling the conversational gap of traditional language education.”

Iliescu believes that Mondly VR provides instant immersion and conversational learning which beats out any competitor in the market. Real-life scenarios take months of preparation to visit foreign countries but with VR you can instantly travel and practice speaking languages at the place of origin.

The app is available today on the Google Playstore for the Daydream platform at $4.99. It is also available on the Oculus Store for the Samsung Gear VR.