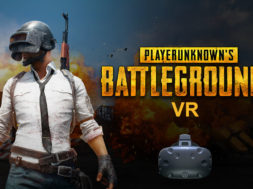 Playersunknowns Battlegrounds (PUBG) is currently one of the hottest games in existence. While its only in Early Access mode on Steam, the game has managed to rival the likes of CS:GO and League of Legends (LoL) in terms of popularity. As a matter of fact, Bluehole who is the publisher of Playerunknown’s Battlegrounds has sold over 13 million copies of the game. And with its viral sensation, a YouTuber and modder has found out a way to play PUBG in VR.

The YouTuber named Rogue Shadow has been able to play PUBG in VR by using multiple software according to the YouTuber. He said “This took me like two weeks to get it running. I’ve messed around with so many programs… I’m using three different programs right now with a ton of weird settings and customized stuff.” It sounds quite different to how a particular modder was able to play Star Wars: Battlefront 2 in VR.

He was able to use the HTC Vive to play PUBG in VR. When you watch the video you can see that the headset accurately tracks his movements in the game. But instead of using the Vive wand he is using a traditional mouse to scroll and shoot. He also states that the menu is smaller than traditional view on the screen.

During his gameplay he describes the landscape and terrain as life-like where if you approach the tree, it looks like its right in front of you. Also while playing PUBG in VR you notice the subtle details you wouldn’t see during traditional gameplay. We aren’t quite sure about his framerate but we expect it to be 90 or higher since you can uncap it in the game. He’s also dropped the graphics settings down to medium which helps boost the FPS.

Overall, it sounds like an interesting way to play PUBG in an immersive environment. He explains how it just seems more alive and more exciting to play in VR over traditional PC play.