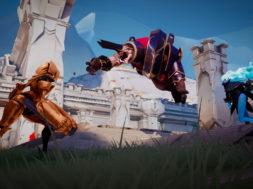 Megalith by Disruptive Games has been out on PSVR for over a year now but the studio looks to open up their game to the PC VR platform.

The game itself has gotten a lot of great reviews from the PlayStaiton community and it provides an immersive experience and a new take to the MOBA genre.

In Megalith you will choose from one of five starting Titans and work in teams of two to take on other Titans in a battle for control of mankind. The Titans each wield unique powers and abilities derived from their origin. These abilities can be used alone but become even more effective when coordinated with an ally.

Each team must protect their side while attempting to lead their minions into enemy territory and breach their defenses just like in most MOBA games. Titans will need to destroy enemy walls and towers in order to make their bases vulnerable to attack. Powerful siege minions can be summoned to aid in the path to victory.

In the trailer you can see how you will play in first person mode over the bird’s eye view in the popular MOBA games such as DOTA and League of Legends.

The studio is currently in production to widen their platform compatibility and we will notice a large boost in overall performance on the PC VR platform. The studio also went ahead and created add-on characters you can buy on the PlayStation VR platform so we can look forward to that on the PC side as well.

Currently, the game is priced at $29.99 on the PlayStation store and we will probably find similar pricing for the game on the PC VR side.

Disruptive Games hasn’t officially stated when the game will be released but we can probably look forward to it some time this year in 2020. The game will be compatible for the HTC Vive and the Oculus Rift.