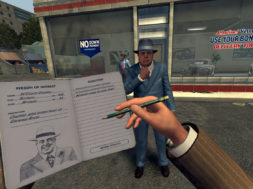 LA Noire: The VR Case Files by Rockstar Games has finally released on Steam. The game is optimized for HTC Vive users and features a unique immersive experience in VR.

L.A. Noire: The VR Case Files for HTC Vive has players step into the painstakingly recreated world of 1940’s L.A. through the eyes of Detective Cole Phelps to solve cases from across all five desks of the original L.A. Noire, including: Upon Reflection, Armed and Dangerous, Buyer Beware, The Consul’s Car, The Silk Stocking Murder, Reefer Madness, and A Different Kind of War – each picked for their suitability to the virtual reality experience.

You’ll be coming face to face with key witnesses for interrogations, investigate crime scenes for evidence with the ability to physically pick up and manipulate objects, get behind the wheel of period-specific cars, engage in chases and shootouts, and much more – all in an incredibly detailed recreation of 1940’s Los Angeles, with 6DoF.

L.A. Noire: The VR Case Files for HTC Vive features seven cases pulled from across the five desks of the original game – Patrol, Traffic, Homicide, Vice and Arson, picked for their suitability to the virtual reality experience, alongside an in-game tutorial:

– Patrol: Upon Reflection – Taking a call from KGPL, Officers Phelps and Dunn provide uniformed assistance for an evidence search after a brutal murder in a downtown alley.

– Patrol: Armed and Dangerous – Phelps and Dunn respond to a radio report of a “211” (L.A.P.D. radio code for an armed robbery) in progress with shots fired at Westlake Savings & Loan.

– Patrol: Buyer Beware – Phelps hears gunshots as he walks his beat down Grand Avenue across 7th Street and races to the scene of a fatal shooting outside the Nunn Bush Shoes store.

– Traffic: The Consul’s Car – Phelps and partner Stefan Bekowsky investigate an abandoned car and uncover the seedier side to international diplomacy.

– Homicide: The Silk Stocking Murder – Phelps and partner Rusty Galloway investigate the brutal murder of another young woman, left naked in an alleyway near City Hall. Is this the work of a lone wolf or a copycat serial killer?

– Vice: Reefer Madness – Phelps and partner Roy Earle meet with Freddie Calhoun, a drug addict and police informer who may know something about a drug distribution ring the two are investigating. Reefer Madness is from the second downloadable pack to the original L.A. Noire.

– Arson: A Different Kind of War – Claims Investigator for California Fire & Life, Jack Kelso is on the hunt for an arsonist known as the “Bug Spray Arsonist,” with potential links to a series of recent murders and kidnappings across the city.

If you are running on AMD hardware, there might be certain performance issues. only specific combinations of AMD and NVIDIA/Intel Hardware will allow the game to play as intended:

– If using an AMD Ryzen 7 CPU, an NVIDIA GeForce GTX 1070 (or above) graphics card is required to play