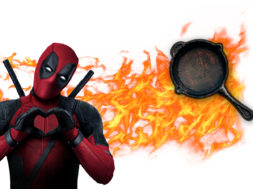 Ever since PUBG was released as an early access game, the mighty pan has been one of the biggest highlights. Players around the world use the pan to melee kill their opponents and also use it as a shield to protect themselves from gunshots. As a matter of fact, over 13,418,123 people were killed by the pan during PUBG Early Access. That equates to a player dying every 2 seconds by the pan.

Now, Deadpool 2 seems to have drawn inspiration from the game and will feature a scene where Deadpool uses it to shield himself from a shotgun. Yes, the enemy shoots a shotgun at point blank and seems to ricochet, killing himself.

From most videos online, this has been proven to be a myth and aren’t actually strong enough to stop bullets; even the mighty cast iron pans. The one that is used in the movie seems to be a regular frying pan. The one used in PUBG seems to be made of cast iron. Usually, modern household pans aren’t made from cast iron. Rather, they are aluminum or stainless steel. YouTubers have been putting real life pans to the test where they’d shoot various guns at it.

In the video, you can clearly see how easily a bullet goes through a frying pan. If you were to ever shield yourself from a bullet, a frying pan would probably be a bad option. A thick book might even be better than a frying pan in terms of stopping a bullet.

Regardless, it seems like guns and frying pans are the things these days in entertainment.