Xbox has created a lineage of successful consoles dating back to the early 2000’s with the release of their original Xbox. The original Microsoft gaming system was a revolutionary piece of console that out-performed the likes of Nintendo N64. They jump started some exclusive AAA franchises with titles such as Halo and Gears of War. But recently, Xbox has been seeing a stagnant decline in sales with their Xbox One. They haven’t provided major updates to their flagship console besides releasing their “S” version while their main competitor, Sony Playstation, is about to release their VR ready headset called the PS VR. This allows Playstation to be in a field of its own as it’s going to be able to deliver VR games and experiences through the use of their VR headsets. The current Xbox One doesn’t supply its user base with this option nor capabilities. However, they look to change that in the future.

Xbox isn’t the type of company to just lie dormant while their competitors continue to push the boundaries. Nay, they are revamping the successful lineage with their future console nicknamed Project Scorpio. This piece of machinery, which is scheduled to release sometime next year in 2017, is suppose to be the pinnacle of console gaming according to Xbox. They look to revamp what a console gaming system can do and what graphics can look like on a “Non-PC” system.

Here are the things we know about Microsoft Xbox Project Scorpio:

The improvement of GPU and Graphics

Many gamers are currently turned off by consoles because of their lack of power and performance. With Project Scorpio providing 8 GPU Cores along with a strong graphics card, this might not become an issue anymore for PC gamers.

Graphics are of big importance to fans of gaming as quality in picture help with the immersive experience and storytelling. Most games today aren’t ready to be played in 4K as technology needs to improve a little further. But Project Scorpio looks to have this in mind as they’re trying to bundle together a powerful machine that can deliver 4K gaming in 60Hz encased in a small plastic box.

Project Scorpio Will Be VR Ready

Beyond that, there isn’t much to speculate in terms of performance. However, one thing that’s truly exciting is the fact that Microsoft Xbox plans to integrate VR technology into Project Scorpio.

“We’re moving fallout 4 to VR and to have a console that can support that at the resolution and speed that we really want it’s going to be magical.” – Xbox

This means that some time next year Xbox will be able to compete on Playstation’s level by providing VR ready consoles to an eager fan base. Many gamers will be looking forward to re-living the experience of playing Fallout 4, but this time in virtual reality. 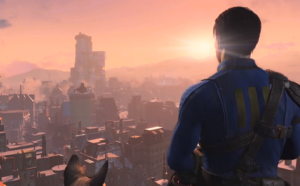 It hasn’t been determined yet if they’re going to create some type of cohesive platform between the Microsoft Hololens (augmented reality headsets) and Project Scorpio. Hololens is a big part of Microsoft’s identity for the future along with Project Scorpio. Having both AR/VR capabilities is something unheard of out of a gaming system. If they were to successfully integrate the Hololens to Project Scorpio it would catapult the console into a league of its own. And this isn’t too far-fetched of a speculation as the market looks promising for both technologies in the future and Microsoft can capitalize on both fronts with this strategy.

A big factor that’ll contribute to the success of Project Scorpio will be the pricing. Currently, Microsoft One S is priced at $299 to be competitive with its arch-nemesis (PS4). But many experts speculate that Project Scorpio will be listed at around the $600 mark, which is significantly higher than the current Xbox One S price. Customers today are very intelligent shoppers as prices are readily available to be compared alongside quality and specs. If the price point is just too high, they’ll easily opt out of purchasing Project Scorpio in favor of something more affordable. But Xbox is letting the future consumers know not to panic.

“I wouldn’t get people worried that this thing is going to be unlike any console price you’ve ever seen. We didn’t design it that way,” said Phil Spencer, Head of Xbox. “That said, the opening price point for the Xbox One S, and the different hard drive sizes that is a critical part of this whole product. When I think about it as a product line, you should expect the pricing to kind of be in line with that.”

The statement by Phil Spencer let’s us know that it’ll be competitively priced but at the price level of premium gaming consoles. Currently, for the VR market it’s the HTC Vive and Oculus Rift listed around the $600 – $900 range. But as technology gradually improves and adapts to a market, it tends to get cheaper. So by the time Project Scorpio is ready to launch, there might be a chance that the price point has decreased since the time of production. Also, gaming companies such as Xbox know the benefits of pricing hardware at a low margin because they can make up profits with back-end features such as Xbox Live and DLC’s. They can also make up profits with exclusive games and premiums.

Microsoft has a great resume in creating quality products and it should be looked the same way for Project Scorpio. People have been criticizing gaming consoles the way they do with the smartphone industry; without innovation. But with the upgrades that the console gaming industry is making we should observe it in a new light. The industry is pushing for a new era of gaming, especially with VR integration and we should be thankful to that in the end. We hope to see new information released in the near future about Project Scorpio and what types of news we have to look forward to in 2017.