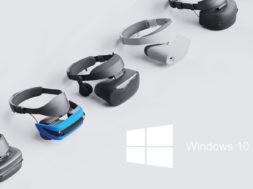 The landscape of VR is starting to shape and mold together as we start to see the emergence of new headsets and innovations. Currently, we have multiple rivaling companies: Oculus Rift, HTC Vive, and PlayStation VR. These are currently the leading headsets that don’t require a mobile device to operate. But starting today, this will all change with the emergence of Windows mixed reality headsets.

Microsoft has partnered up with several tech manufacturers to launch their fleet of “mixed reality” headsets that deliver 6DoF operated through a Windows PC. The first mixed reality headset — The Dell Visor — has launched today at $449.

Reasons why Microsoft is launching the Windows Mixed Reality platform

Microsoft will be flooding the market this holiday season with several headsets manufactured by several companies. They are going to flood the market with different choices and brands that operate through a singular platform, Windows. This allows Microsoft to control the digital marketplace and handle the back-end operations of VR and AR.

Currently, the immersive industry is in its infancy. There’s tons of room for growth with experts projecting the market to saturate several years down the road. Microsoft holding onto the most chips allows them to have a better chance in becoming the major player down the road. Comparable to the early ‘Console War’ days, there will be many contenders but only a few will survive and dominate. Currently, in the console market there are only 3 contenders: Nintendo, PlayStation, and Xbox. Much will be the same in the VR market down the road.

Windows is also the most widely used OS in the world. Hundreds of millions of people use a Windows installed PC or device at their homes and at their workplace. Introducing these Windows mixed reality headsets will make the idea of adopting VR a lot easier when the time comes.

“We are standing at the threshold of the next revolution in computing,” said Alex Kipman, the main brainchild behind the Hololens. “A revolution where computers empower us to expand our capabilities and transcend time, space, and devices. A revolution where we immerse ourselves in virtual worlds of our choosing and we accomplish seemingly impossible things while making lasting memories with the people we love.”

The Future For Microsoft

We believe we will have to evolve today’s devices and experiences to deliver on the promise of mixed reality. Since we introduced the world to mixed reality we have been committed to approaching this revolution in a patient, meaningful and holistic way.”

Microsoft will focus on 3 key ideas:

Microsoft will be launching its Windows mixed reality platform with more than 20,000 apps in the Microsoft Store. They recently announced the exclusive Halo Recruit VR experience and will be releasing a lot more exclusive content down the road. Taking the same approach as Oculus, there will be studios that side with Microsoft and release exclusive titles on their platform. This marketing strategy might actually be more common on the Windows platform than on Oculus due to their connections with Xbox.

For those that think the Windows Mixed Reality platform might be a mistake be aware, this was a pre-meditated strategy by one of the most powerful companies in the world. This was in the works for years and now you are witnessing it unfold before your eyes. Get ready for a shift in the market. It will be a free-for-all for a few years.