Windows Mixed Reality Headsets Will Have Access To SteamVR Marketplace 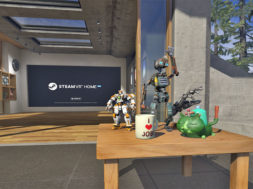 Windows Mixed Reality Headsets Will Have Access To SteamVR Marketplace

Microsoft has made an announcement that the upcoming Windows mixed reality headsets will support Steam and the VR marketplace. With Valve owning the biggest consumer marketplace for gaming on PC, Microsoft has realized that it’s a strategic move to rapidly push their platform and their partners’ upcoming VR headsets.

“I am thrilled to announce that Steam content will also run on Windows Mixed Reality headsets,” said Alex Kipman, Technical Fellow at Microsoft. “Virtual reality enthusiasts know that Steam is a great place to enjoy cutting edge immersive experiences. We can’t wait to bring their content to you.”

This is quite the exciting news as many were worried about the availability of content when Acer, Asus, HP, and Dell release their mixed reality headsets.

All of the announced headsets are planned to release during the holiday season. With each of them being unique to their company and manufacturer, we’ll be able to see a wide range of choices.

“The introduction of Windows Mixed Reality headsets is a big step forward for VR,” said Joe Ludwig, Programmer at Valve. “Working with Microsoft to include SteamVR compatibility with these devices is also a big step in growing VR as an open platform for developers and consumers. With a broad range of hardware options available from leading PC manufacturers, the Steam community will have more choice than ever to experience the amazing potential of VR.”

There’s no clear indication as to whether all VR games on the Steam marketplace will be playable through the Windows VR headsets. Companies and studios may have to port them over to a certain platform to deem it playable for the upcoming HMDs. Stay tuned as we provide further updates to Microsoft and the Steam marketplace.