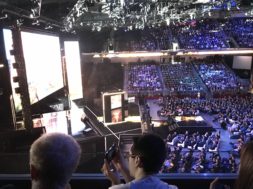 Microsoft has recently announced that they’ll be making a huge showing at this year’s E3 conference with the Xbox team. Since their first appearance at E3 in 2000, Xbox has been showcasing the potentials of their console system. Now, they seem to be ready to make this year’s E3 the biggest ever stating “it will be our biggest showing ever.”

At last year’s E3 conference, they took over their own venue to have a briefing about the upcoming games, consoles (Xbox One X), and more. They will be doing things in a similar fashion this year but with more inclusion with the fans at the Microsoft Theater.

“The Microsoft Theater will be home to official E3 events like the Xbox E3 2018 Briefing on June 10, 2018 at 1PM PT, various Xbox FanFest activities, hands-on gameplay and demos for all E3 attendees and more. Not only does the Microsoft Theater allow us to centralize our Xbox presence at E3, but it’s size enables us to include even more fans and partners in the Xbox E3 2018 Briefing than ever before.”

This could mean that Microsoft won’t have a huge presence inside the LA Convention Center like before. Rather, they will be using their own space that’s solely dedicated to Xbox itself. E3 has always been the largest showcasing for gaming companies, devs, and studios. Now, it seems like Microsoft will be creating a micro show of their own.

In addition, we should be hearing about their Xbox VR integrations soon and hopefully that news will be announced at this year’s E3 conference. Microsoft is set to unveil more news in April so stay tuned.