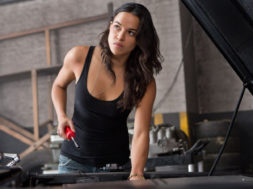 Michelle Rodriguez, best known for her role in Fast and the Furious, will be starring in a new upcoming live-action VR series called The Limit. This new short-form series is created by the VR division a STX Entertainment and STXsurreal. It will be released through the company’s VR app.

The series was co-written by Racer Max and was created from the ground-up as a native VR experience. The new cinematic VR format will create a bridge between traditional widescreen and 360-degree video.

The Limit went into production in late January and has just wrapped up its production this month in Austin. The series was shot at Robert Rodriguez’s Double R productions studio. They plan on releasing The Limit some time in mid 2018 through STX Entertainment’s VR app. This will be the first time that Michelle Rodriguez stars in an episodic VR series.