Memes Like Ugandan Russian Knuckles Are Being Created Through VRChat 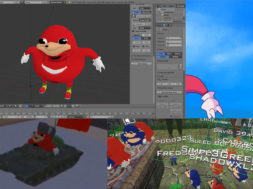 Memes Like Ugandan Russian Knuckles Are Being Created Through VRChat

VRChat is continuously making headlines these days for its sheer popularity, weirdness, and the various nuances inside the social platform. The social VR space is now home to more than 1.6 million users according to Teamspy and has become a world of its own.

Recently, VRChat has been creating another ripple on the social waves where users have been caught creating new memes on the platform. Take the Ugandan Knuckles for example.

With a mixture of Knuckles from Sonic and the famous quote from a Ugandan movie Who Killed Captain Alex, the Ugandan Knuckles was born in VRChat. But this couldn’t have been possible without tidiestflyer who recreated  Gregzillas‘ Knuckles artwork in 3D.

You can see in the video above how users congregate and create havoc through the Avatar. They try to speak with an Ugandan accent and use reference lines from the movie and also try to speak like a Ugandan warlord.

And while the Ugandan Knuckles is fairly new to VRChat, another new meme was recently created called the Russian Knuckles. This new meme was first seen in the social VR space and places the Knuckles character inside a tank with a Russian flag. It also uses a Russian voice line from Call of Duty and plays the Soviet anthem.

There has been some controversy around these new memes where people find it offensive and racist. But the sheer overflow of popularity and comedy has eclipsed that notion. The meme is now even starting to show up in other games and platforms such as Left 4 Dead 2. Here is how you can download the mod for yourself if you want to try it out.

What are your thoughts about these new memes such as Ugandan Knuckles and Russian Knuckles on VRChat? Let us know.