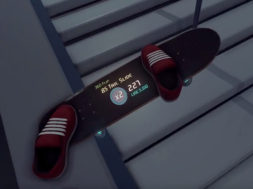 Tony Hawk was one of the most popular games in the late 90’s to early 00’s. Players could choose a professional skateboarder and go down ramps that skyrocket you across hills, table-tops, and even cliffs. And for those of you that still reminisce over those glorious days, have no fear as Hover Skate VR will allow you to relive some of those treasured moments in VR.

First released in March, Hover Skate allows you to use your hands to skate and maneuver around the the virtual skatepark on top of your hoverboard. You’ll be able to pull off hundreds of tricks that are found in many skating games. You’ll also be able to choose various levels to practice and learn some of these moves.

Hover Skate was developed by the talented team over at Hyperlight Studios and have been frequently updating the game for better performance.

Below is a list of what’s new to the game:

– Modularized Board Velocity Control and Flip Trick Systems – This will eventually allow for presets and different control modes.
– Trucks are now physics objects and can rotate similar to real trucks.
– Slightly Increase Left/Right max movement
– Grind acceleration: Grinding downward rails/ledges will now increase speed
– Added Continue button and hot keys after you bail. Still bugs when continuing inside of geometry I’ll address this next build.
– School has been greatly expanded.
– New Grip system – should allow for better movement of the front hand
– Added sparks for grinding on replays
– Added Oculus Controller and tooltips
– Updated replay controls for Oculus controller
– Changed default Bindings for shoes: Your bindings might be messed up so be sure to reset them.
– Pass on Grind trick icons. This is still a WIP.
– Added Dragon Flips and Dolphin Flips
– Increased board spawner trigger size. Should help with spawning the board.

Hover Skate is currently available on Viveport. While the mechanics might be a lot different from the original Tony Hawk games, this VR title will provide you with new challenges that are quite different from other VR games today.