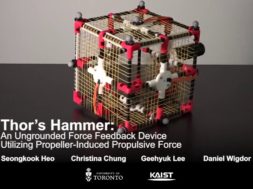 The Thor’s Hammer is an ungrounded force feedback device that uses propeller propulsion to pull and tug at your arm with 3DoF. The device is shaped in a cube and has 6 motors and propellers covering all sides. Each propeller creates an outward airflow that provides the force.

In the video, they demonstrate how Thor’s Hammer can be applied in VR settings. The first one they cover involves fishing and water. If you place Thor’s Hammer in the water, you can feel the current flow along with the buoyancy forces. The cool part is that the resistance changes as the stick moves.

The second demonstration involves walking a sheep with a leash. As the virtual animal moves about, you can feel the tug from the virtual animal and the resistance it outputs as you pull it closer towards you. You can control the animal using the peripheral device.

The third demonstration shows how you can feel the resistance when you push a button in virtual reality. They provide an appropriate force feedback when you push on the button using Thor’s Hammer which is quite interesting.

The fourth demonstration involves holding different weights through the device. When you pick up virtual items using Thor’s Hammer, you’ll notice a different amount of resistance that’s dependent on the items weight.

This device is currently just a concept model where they would have to address some issues such as noise and overall strength to the design. But for it being a concept, it is quite creative and very promising. We hope to some day see a finished design to Thor’s Hammer in the marketplace.