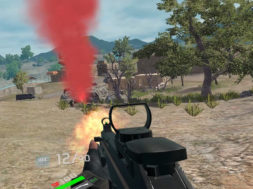 Battle Royale is still one of the most popular genre in games for console, PC, and VR. They provide a sense of competition where you must be the last survivor or surviving team. And to create a more immersed experience of this genre, Skyline Games has decided to release their own version called The Last Player: VR Battle Royale.

The Last Player is a virtual reality Battle Royale game where players have to land on a battlefield with other competitors. You will have to find weapons to arm yourself and use cover to hide from your enemies.

If you are familiar with Battle Royale games then you will find most aspects to be similar. This includes going on planes to drop to a location, picking up loot, shrinking boundaries, and being challenged to be the last survivor. But the aspects of competition and the way you handle yourself change using virtual reality.

The immersive experience kicks in and the way you handle your weapon to shoot at your opponents will feel different than traditional PC or console games.

The Last Player is a new VR title with mostly positive reviews thus far on SteamVR. You can download the game for $16.99 on Oculus Rift, HTC Vive, and Valve Index.