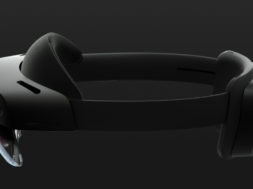 During the MWC conference Microsoft finally unveiled the news and press behind the all new Hololens 2. The successor of the original Microsoft Hololens, the second generation will be providing a more immersive and spatial experience.

The second generation headset features a laser-scanning display called MEMS which enhances the original FOV by more than two times on the first Hololens. They state that it is the most powerful efficient 2K display in existence. Another cool feature is being able to log into your Hololens through Iris recognition.

The front enclosure is made entirely out of carbon fiber for light-weight, durability, and aesthetically pleasing reasons.

But the 3 components that Microsoft is really concentrating on is around immersion, comfort, and time-to-value. Microsoft stated that they’ve improved the Hololens 2’s comfort by more than 3x.

“Today represents an important milestone for Microsoft,” said Julia White, Corporate Vice President, Microsoft Azure. “This moment captures the very best efforts and passion of numerous teams spanning Azure, HoloLens, Dynamics 365 and Microsoft Devices — this truly is a moment where the sum is greater than the parts. From cutting-edge hardware design to mixed reality-infused cloud services, today’s announcements represent the collective work of many teams. And none of this would be possible without our passionate community of customers, partners and developers.”

Hololens 2 will be available some time this year in 2019 according to Microsoft. It will start at $3,500 which is relatively similar to the original headset. Bundles including Dynamics 365 Remote Assist start at $125/month. HoloLens 2 will be initially available in the United States, Japan, China, Germany, Canada, United Kingdom, Ireland, France, Australia and New Zealand. You can pre-order here.

tags: ar headset hololens 2 Microsoft
previous Here Is The Teaser For The Upcoming Microsoft Hololens 2
next Check Out How The Weather Channel Is Using AR Tech To Show Icy Weather Conditions
Related Posts