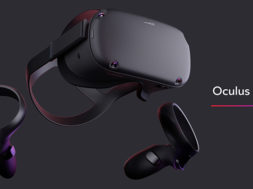 During the early moments at OC5, the Oculus team has announced that the Santa Cruz will be releasing under the official name of Oculus Quest. The untethered headset is set to release in Spring of 2019 for $399 USD.

This unique HMD will come equipped with new Touch controllers that make the whole experience seamless. The Oculus Quest will not require any PC or devices to power the headset. Oculus has also stated that there will be over 50 titles lined up for the launch of the Quest including Robo Recall, The Climb, and Moss.

Oculus will be releasing a new teachnology called Oculus Insight which powers the inside-out tracking, Guardian, and Touch controller tracking for the new HMD. They use 4 ultra wide-angle sensors and computer vision algorithms to track your exact position in real time without any external sensors. Insight gives you a greater sense of immersion, presence, and mobility, plus the ability to go beyond room-scale.

The headset display will feature 1600 x 1440 per eye with 64 GB of storage. It also incorporates a lens spacing adjustment to help maximize visual comfort. You will also find that the built-in audio is improved over the the Oculus Rift for higher sound quality.