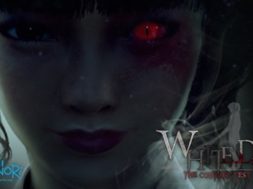 White Day was first introduced in 2001 and gained notoriety as a classic cult horror games. Now the game is back as a full on immersive VR game.

White Day: Courage Test is a VR-game that will be available at virtual reality (VR) theme parks. It is developed with VR-optimized gameplay through Unreal Engine. It is produced as an immersive game that provides a sense of horror and action.

The user will take on role of a student who enters the school at night to participate in a courage test through a school club and explores the area for a certain period of time.

The goal is to find various hidden items and find a way out of the school where strange phenomenons occur.

Users will feel a sense of freshness when playing the game in an VR theme park. Especially when the visuals and sounds perfectly reproduce the sense of being at this school.

The game features a tutorial that guides the user through the basic controls and system of the game when first launching the title, therefore staffs are not required to provide instructions at VR theme parks.

White Day: Courage Test offers a unique party system where a secondary user can hide and move objects in the game via a wirelessly connected tablet PC. This will hinder and create some additional thrill for the main player who is moving around in the game as you confuse and even scare the main player.

“It has the best quality that overwhelms any horror experience game that may be enjoyed in a general VR theme park and users can enjoy it with other users through ‘dual play’.

Currently, we are focusing on sales of B2B versions for VR theme parks. We tested it in Korea for the past year and planned to work with our global partners to distribute it in a stable version.”

Sonnori is developing a fun, new, user-friendly game with the slogan ‘For fun For new For you’. Sonnori is a multi-platform developer creating unique IPs and titles including mobile, PC, console and VR games.

The representative work White Day – Mysterious school was launched in 2001 and successfully remade as a mobile game at the end of 2015. Sonnori received the Korea Game Awards in 2016 in four categories: Excellence Prize in the Mobile Game, Technology Creation Award and Scenario.

Visit their website for more detail. You can Email [email protected] for more info.