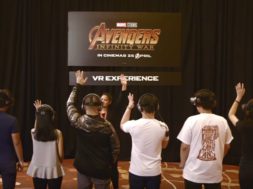 Marvel’s superheroes are some of the biggest characters known around the world. Characters like Iron Man, Thor, and even Groot have massive fan bases outside of the U.S. This year, as a part of Disney’s marketing campaign, Marvel decided to treat some of these international fans with an unforgettable “VR experience.”

They brought the fans inside a controlled area where they threw some Gear VR headsets on them. The fans were supposed to watch a unique Avengers: Infinity War VR experience but was presented with an even bigger surprise.

Right when they were in the middle of watching the VR content on the Gear VR headset, the screen prompted a technical difficulty message written by Tony Stark. Then they were directed to take off their goggles so that I [Tony Stark] can see you a little better.” And to the lucky fans’ surprise, they saw Tony Stark, AKA Robert Downey Jr. in person.

Many hollywood studios have been creating short VR experiences as a part of their marketing strategy. Marvel decided to bend that strategy a little bit and surprise the fans in person. For those of you who have been waiting to see the movie, Avengers: Infinity War is now out in theaters. Make sure to check out the movie for yourself!