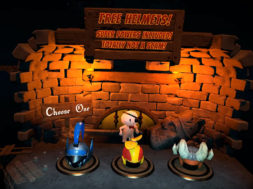 Usually, dungeon crawler VR games don’t really interest me but I have to say, I love what I’m seeing from TriHelix Studios with Marshmallow Melee.

This new game in development by the three talented developers at TriHelix takes you inside a toy-sized world where you must battle minions using your Marshmallow warriors. These specialized fluffy characters can be controlled by pointing a laser at a certain area on the map through your motion tracked controllers. TriHelix describes this quirky method as a “cat + laser pointer.”

The 3 man team came to develop this new VR game with a variation of games in mind. They believe that Marshmallow Melee is Pikmin meets Diablo meets the He-Man Castle Grayskull playset from the 80s. Essentially, it’s a mesh of some really cool games.

They’ve built the game for casual play where you can sit down and enjoy the front-facing VR game, providing your marshmallow warriors with some wacky weapons such as a spatula as you guide them through an adventure to defeat Steve, The Wizard.

Steve, The Wizard lives at the top of a giant tower that reshuffles the floors every time you play, so you’ll never have the same experience twice. On your journey up, you’ll encounter different zones such as the Forest of Doom, Crystal Caves, and the Frozen Wasteland also known as Wisconsin.

Above is a video that shows how the tower works.

TriHelix built Marshmallow Melee so that you can replay it over and over. They didn’t want to create a 15 minute demo experience but rather a deep game with a physics-simulated combat system, tons of weird weapons, special power helmets, unique mechanics per zone, and amazing lighting for that special VR experience.

They’ll be releasing an Early Access to the game next month on Steam. Stay tuned as Marshmallow Melee is sure to set some new standards in the Dungeon Crawler VR genre.