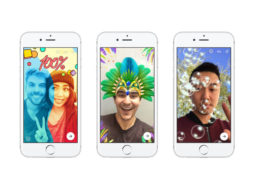 One day after Snapchat’s announcements about their new updated products and AR filters, Mark Zuckerberg announced their very own AR filters for Instagram.

“New face filters on Instagram today!” Zuckerberg announced. “This one’s my favorite so far. These kinds of effects are how we’ll experience augmented reality for the first time. This is just the beginning.”

The Facebook team, including Oculus and Instagram, have all been ramping up their advancements in immersive experiences and technology. While Facebook faced some criticisms for mimicking Snapchat with ‘Instagram stories’ and ‘Messenger Day’ the company announced that it was seeing over 200 million people using their new platform every day. This number was significantly higher than the one reported by Snapchat who said they see around 161 million daily active users.

This new digital overlay idea for selfies and pictures will generate a new path of revenue for Facebook and Instagram. Advertisers will have access to creating custom AR filters for their audience, similar to how Snapchat generates its revenue today. Mark Zuckerberg has created an initiative in pushing the VR and AR platforms as he believes it is the future.

Additionally, Facebook has hundreds of millions of more users than Snapchat, which will make it a lot tougher for Snapchat to compete.