Home news Mario Is No Longer A Plumber According To Nintendo
news
September 4, 2017 SJ Kim 0

Mario Is No Longer A Plumber According To Nintendo 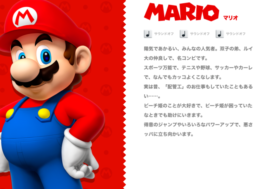 Mario Is No Longer A Plumber According To Nintendo

Mario has always been iconic for his role of being a plumber where you’d see he jump down sewer pipes in order to access the underground world. With his fancy blue suspender pants and his famous red hat, he brought joy to millions around the world serving as the most popular plumber around. But recently, Nintendo seems to have graduated Mario from this role as he now does just about everything besides plumbing.

According to the official Nintendo profile, Mario is no longer the plumber we once knew and has taken on various roles in the world of sports and racing. Here is how Mario is described on his official profile page:

Cheerful and cheerful, everyone’s popular. Twin brother, Luigi is a good friend and a name combination. With sports utility, I will do everything cool, tennis, baseball, soccer and car racing. Actually, there seems to have been work on “plumber” a long time ago …. I love Peach Princess, and if Princess Peach is in trouble, I will go help at any time. We will face bad koppers with good jumps and various power-ups.

While the translation is rough, he’s described as being a plumber a long time ago. So in recent history, he was in fact not a plumber but an athlete and a race-car driver.

As far as Luigi goes, Nintendo didn’t give any specifics as to whether or not he’s still a plumber like his brother once was. On his official profile, Luigi is described as being “a little scary” but has a “nice personality.” Nintendo states that he is “the owner of the ability to do anything such as Mario.”

Luigi is differentiated from Mario with his height, color, and mustache. Instead of wearing red like Mario, Luigi is depicted as wearing green. What are your thoughts about Mario no longer being known as the plumber?

tags: luigi mario nintendo
previous Alexa and Cortana Virtually Shaking Hands In A Partnership
next Fun Story: Man Flies To McDonald's For A McDouble On A Paramotor
Related Posts