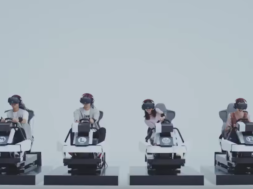 HTC has announced that they’ll be partnering up with Bandai Namco to bring the VR Zone Portal to the United States. This will include the highly anticipated Mario Kart VR game.

We’ve seen plenty of videos of users getting to experience what Mario Kart VR is like overseas but people in the states will finally be able to experience it in person at the newly announced VR Zone. The new center will be located off the national mall in downtown Washington D.C. and include multiple experiences.

Mario Kart VR is a multiplayer experience that offers four players a chance to hop into the world of Mario Kart and experience racing through the iconic Mushroom Kingdom as either Mario, Luigi, Peach, or Yoshi.

Mario Kart VR will not only feature industry-leading graphics but, in homage to the original game, Vive’s Tracker technology will allow players to reach up and grab classic items like banana skins to pelt their opponents with. Additionally, Mario Kart VR will boast haptic feedback capabilities, creating a truly four-dimensional experience that allows players to feel every single twist and turn.

Steve Ignarski, National Sales Manager for BANDAI NAMCO Amusement America, said “BANDAI NAMCO is thrilled to be a part of the innovative, cutting-edge project that is VR ZONE Portal. The launches in Japan and the UK brought great success, and we hope to follow suit in Washington, D.C. Mario Kart VR is a long-awaited title and we have no doubt it will be well-received in the states, due to its incredible, immersive game-play and outstanding equipment from HTC Vive.”

Another title featured in this location, the single-player Argyle Shift, places you as the test pilot on a mission to drop your robot into a designated zone. Set in Japan in A.D 2145 where two corporations govern the land, there is an enemy attack during flight forcing you to engage in battle with the help of ‘Eine’, your Artificial Intelligence humanoid friend. The motion seats move in synchronisation to match your piloting skills of the giant mech.

The VR Center is said to launch in late September, which should be around today’s time. We will provide further updates shortly.