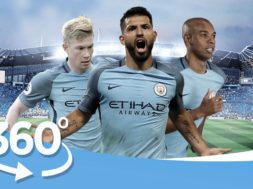 Jaunt Inc. has been a popular platform for checking out cinematic VR experiences and storytelling. The company is home to a plethora of work ranging from Star Wars: The Force Awakens premiere, exclusive 360 interviews, and now home to a VR experience telling the story behind the famous Manchester City Football club.

The collaborated video captures various moments about the club including gameday preparations, inside the locker room moments, Man City fans, the football athletes, and of course the Etihad Stadium.

Diego Gigliani, Senior Vice-President of Media and Innovation for City Football Group said:
“There’s nothing that compares with attending a match at the Etihad Stadium, but the emergence of 360 video and virtual reality has allowed us to capture some of that atmosphere and excitement in ways that weren’t possible in the past. As our fan base continues to grow, both within the UK and globally, we want all of our fans to get a taste for what it’s like to be at the Etihad Stadium – from cheering in the stands and watching players line up in the tunnel to welcoming the team off the bus and standing by-side with the stewards ensuring the crowd’s safety.

The VR video also does a superb job with end-to-end narration keeping the energy ecstatic and describing the atmosphere of a soccer match.

Dominic Collins, General Manager, EMEA, Jaunt VR, added:
“Working with a prestigious football club like Manchester City has been an amazing experience. The club is the perfect embodiment of the modern football club, and this is a further example of its commitment to innovation in sport.

“The Manchester City Match Day experience perfectly showcases what can be achieved with modern VR, and complements the fast-paced and passion-filled nature of Premier League football. VR is a new opportunity to engage with hundreds of millions of sports fans across the world, many of whom would otherwise never have the opportunity to experience a sports game at this level.”

The Etihad Stadium seats 55,000 people and has been home to the club since 2003 in Manchester. The VR experience can be viewed on the Jaunt VR App, and is also available on other VR platforms including PlayStation VR, iOS, Android, Gear VR, Google Daydream, Oculus Rift, HTC Vive and other web browsers (Chrome/Firefox/Explorer/Safari/etc.). The 360 experience can be viewed in 2D with the use of the web browser.