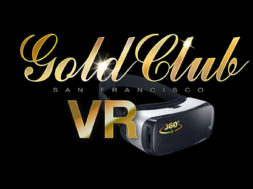 The application of VR in the real world is endless. Aside from gaming, we often discuss its uses in education, healthcare, space, military, automotive manufacturing, shopping, etc. Now, adult entertainment industry is ready to cash in on the action.

Gold Club SF VR, a new experience based on the successful San Francisco, California based “gentleman’s club”, allows users to transport themselves to da club without ever having to leave their living room. Gold Club is available as a free download for Oculus Rift, Google Cardboard, and Gear VR, but not all features can be unlocked without handing out some “ones”. To access more risqué, R-rated features, there is a virtual ATM to withdraw real money needed to tip dancers for full nudity. In addition to the ATM located at the front door, Gold Club has recreated their front desk, main stage, bar, and “champagne” rooms for guests to enjoy private experiences with up to three girls.

Gold Club VR features 15 real dancers, who their audience may already know and love. Four of the dancers work at the real Gold Club SF, and the 11 others are adult film stars such as Chloe Amour, Adria Rae, and Alexis Monroe. VR users are able to go into the club, get VIP treatment, sit at tables, and get virtual lap dances from adult film stars like Megan Rain, Christy Mack, Reya Sunshine, and Kendra Lust.

“I think the VR industry is only going to grow with adult entertainment,” said Reya Sunshine, an adult performer and one of the models in the Gold Club SF VR app, in an interview. “It’s only up from here.”

The adult entertainment industry has long been a major influencer for new video and digital technology. For the past few decades, it’s been credited for driving the winners of format wars (think videotape and disc media), the adoption of online credit card transactions and high-speed internet.

VR is expected to be a $25 billion industry by 2021, according to tech advisor Digi-Capital, and adult entertainment believes that they will be able to drive a decent share of that.