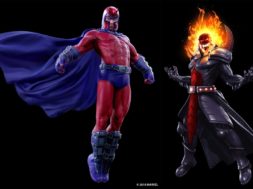 If Venom and Ultron wasn’t enough for villains in Marvel Powers United VR, we have something exciting to tell you. Magneto and Dormammu will be joining the Marvel game. Yes, Magneto the famous super villain from X-men and Dormammu from Dr. Strange.

Magneto is a unique villain that’s been on the big screen for over a decade. He was a part of the original X-men movies who can bend metal at his will. He was once good friends with Professor Xavier but parted ways as they grew older. Magneto is a mutant in origin and grew up a poor Jewish boy who witnessed his parents get tormented. Now he leads an army of mutants to destroy human kind.

Dormammu on the other hand is a completely different villain. He was born millions of years ago in the dimension of the vastly powerful energy-entities called the Faltine. He has a sibling named Umar that helped gather matter for themselves to increase their power which is a practice of anathema to their fellow Faltine.

In the recent timeline, Dormammu is trying to take over Earth. but superheroes such as Dr. Strange and Spider-Man are here to save the day. Dormammu exists in the dark dimension and commands and army of loyal servants to do his bidding.

Marvel Powers United VR is set to release on July 26th for $39.99 through the Oculus store. This is an exclusive title for Oculus and will be playable on the Rift.