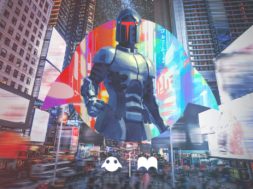 It seems apparent that Magic Leap is on some sort of a PR and marketing stunt, revealing the outer layers of the company. Just a few days ago they released a new video which showcased their team hard at work trying to innovate the new emerging industry. This was the only video they’ve released to the public in a years span.

Now, they’ve released another bit of news where they announced the official partnership with online comic book publisher, Madefire at this year’s New York Comic Con. This was announced during one of the panels called “The Future of Comics in New Realities.”

The panel talked about how Magic Leaps’s mixed reality product will be able to bring an enhanced experience for the comic book lovers. But the Magic Leap team did not talk about their product and HMD solution.

Madefire is currently one of the most popular apps on mobile devices for reading graphic novels and comic books. They launched their VR application last year on the Oculus Store for Gear VR users. Madefire was the first comics platform to launch in VR where readers experience enhanced versions of their favorite superheroes such as Batman, Superman, Transformers, Planet of the Apes, and more.

While media or the public didn’t get to see the mixed reality experience, the panelists described it as “colorful,” “bright,” and “crisp.” They said that you can walk right up to the speech bubbles and examine the text. They can float in the air or be mounted on the walls of your house.

Another description was that you can create environments connected to the superheroes world you’re reading about through the application on Magic Leap. The user could change the weather and digitally make it rain in your room as you read the text in the speech bubbles.

They also stated that you could poke your head through a comic panel to see inside the world you’re reading about.

The two companies are looking forward to launching a mixed reality experience that immerses users in unique environments like never seen before. They looks to blend the virtual and augmented worlds together to bring these superheroes to life.

There aren’t any dates as to when we can expect to see this experience or when Magic Leap’s headsets will arrive. All we know thus far is that we’ll be seeing a Madefire application on Magic Leap’s platform when it arrives.

Magic Leap may be closer than we think.