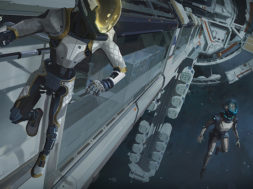 Space is an adventurous and enigmatic frontier where our curiosity paints ideas with vivid imaginations. Ready At Dawn Studio seems to champion that message with the Lone Echo VR game. The unique title delivers an intrusive way of moving around in the VR world with the use of the ‘zero-gravity concept.’

Lone Echo will be both a single and multiplayer game where you’ll see the world around you in first-person. With the relative gravity affecting your movement, you’ll be using your hands to grab onto objects in order to pull yourself closer to your destination. It won’t be the typical foot motion found on games but rather the gravity enhanced experience. And this is achieved in part by using the Oculus Touch controllers.

Ready at Dawn studios is no stranger in creating highly anticipated titles. They’ve developed popular video games such as ‘The Order: 1886’ which was met with a strong turnout in sales (over 1.75 million copies worldwide). But this will be the first VR game that the studio has created.

Being that Lone Echo is the first VR title Ready at Dawn Studios has worked on, they were met with calculated challenges in locomotion and design. During GDC 2017, Jake Copenhaver, the lead gameplay programmer at Ready At Dawn, gave a presentation about the game and the issues Ready at Dawn studios had to overcome.

For locomotion, they studied the physics behind astronauts moving around in space. In the video above, you’ll see how the team focused their attention to subtle details and movements behind zero-gravity movement. Astronauts typically use their hands to propel themselves throughout the ISS. Ready at Dawn adopted this idea and implemented the actions into Lone Echo. And this was a perfect implementation for the Oculus Rift as the current VR system requires actions to be taken through the use of the Touch controllers.

With such advanced physics and controls, Ready at Dawn had to focus on making objects look realistic enough to latch on to. So the team created a procedural animation system for the hands that made collisions look realistic in the VR world. When you come into contact with objects such as rocks, you’ll be able to grasp them by the palm of your hands and chuck it through space. If it ends up hitting an object, you’ll see it burst into fragments. Other objects such as railings are available to interact with where you’ll be able to climb up and down.

Lone Echo will be releasing on the Oculus Rift on July 20th for $34.99. You can pre-order the game today.