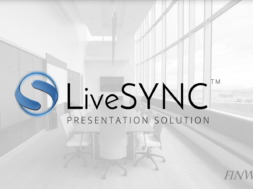 “Finwe announced LiveSYNC just last month and beta tested the app with selected customers for a few weeks. Now we are ready to make the first version available for everyone”, says Juha Kela, CEO of Finwe Ltd. “LiveSYNC starts with a focus on small groups and mobility; it is now trivial to create a presentation kit that fits in a carry-on bag and works anywhere. We are using Bluetooth, so there are no wires, no communication costs, nor a need for network infrastructure. It’s a great solution for all 360 video professionals who need a tool for demoing their content to potential customers.”

According to their latest press release “LiveSYNC is evolving rapidly: the GearVR version is already in the review process and available for customers as custom builds, support for stereo panoramas and positional audio are coming soon as an update, and WiFi networking for larger groups and globally synchronized playback is already under construction.”

LiveSYNC is available as a controller app and players for iOS, Android, GearVR and Daydream. It is also compatible with Spot branded 360 VR video channels and can be integrated into custom apps. Check it out the demo, in action below!