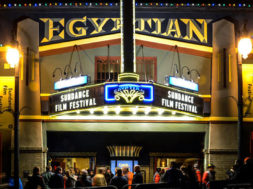 Sundance has always been an exciting event for festival goers where they can check out some of the most prominent films that set the tone for the calendar year. This includes film makers creating immersive experiences on the VR platform. As a matter of fact, there are over 17 VR experiences that’ll be featured at Sundance Film Festival in 2018. The festival officially starts January 18 to January 28th.

BattleScar will transport you into the middle of an animated world where a teenage Puerto Rican girl, Lupe (voiced by Rosario Dawson), is discovering herself at the dawn of New York City’s punk scene. She meets Debbie, a badass runaway kid living in the city, and together they wander the underground worlds of the Lower East Side of the late 1970s.

The run time of BattleScar is around 9 minutes which makes it a decently long VR featured experience.

Chorus is a room-scale social VR experience that transforms you and four friends into fantastical female warriors and sends you on an epic journey to a faraway, Tron-like fantasy world. There, you will battle weird and treacherous monsters to save your species from extinction while the visceral sounds of electronic music duo Justice play.

Chorus was created by Tyler Hurd and the run time is around 8 minutes.

To attain a better understanding of VR, body horror, and the ways that commercial entities manufacture 3-D objects to embody and/or disembody our relationship to gender, Sidsel Meineche Hansen has created DICKGIRL 3D(X), a non-binary version of EVA v3.0, a female-gendered avatar used in the commercial world of adult entertainment and computer games.

The Dinnery Party VR experience is a stylish, immersive, and special effects–infused thriller. Based on the true story of Betty and Barney Hill, it follows the interracial couple who reported the nation’s first UFO abduction in 1961.

Written and directed by Edward Robles, Dispatch takes you inside the head of a police dispatcher (Starr) who is facing one of the greatest challenges of his career during an all-night crime spree. The mini-series features features Martin Starr (Gilfoyle from “Silicon Valley”) as Ted, the protagonist.

As unsung heroes of the law enforcement world, dispatchers have one of the most difficult jobs – receiving awful news at the worst hour, immediately sending help, and hoping for the best outcome. In “Dispatch,” the protagonist, Ted, is thrust into a situation where he is no longer a witness to whatever happens on the other end of the line, but rather, the only person who can help the victim.

Eyes in the Red Wind

In Eyes in the Red Wind you’ll be taken to a remote area where a boat makes its way across an idyllic lake. There, a shaman onboard channels the soul of a drowned man so that the deceased can say goodbye to his beloved. This “soul scooping” ritual is meant to pacify the soul of the dead man, but lust and secrets are revealed that twist the solemn ceremony into a violent tragedy.

Isle of Dogs Behind the Scenes (in Virtual Reality)

This behind the scenes VR experience places the viewer inside the miniature world of Wes Anderson’s upcoming stop-motion animation film Isle of Dogs. It features a series of “on set” interviews with a selection of actors from the cast of Isle of Dogs). All of the actors play dogs in the film, and the interviews feature the animated dog puppets talking as the actors themselves as if between takes, discussing their roles and experiences on the film.

Masters of the Sun

Masters of the Sun is an interactive comic book series, born from the mind of will.i.am (Black Eyed Peas). It features a retro futuristic B-boy zombie thriller about a hip-hop group from East LA that must battle an ancient god who is turning black drug dealers and gangsters into zombies. This epic journey, spanning 13 episodes, explores gang culture, hip-hop origins, and cloaked conspiracy theories—from ancient Egypt to the streets of LA. Starring Queen Latifah, Rakim, Jamie Foxx, Ice-T, and KRS-One.

The run time is around 20 minutes.

Micro Giants is a photorealistic animation that lets the audience experience the ecosystem from the unique “micro world” perspective of insects. Tiny flowers are mighty trees, aphids are beasts, blades of grass become forests, rocks are mountains, and water drops are as big as swimming pools. It is in this magnificently surreal—yet based in reality—world that a brutal and mesmerizing story of survival plays out.

The run time is around 7 minutes.

In On My Way, Artist Yung Jake hops into the Tesla and makes his way to “the spot,” waxing his signature mix of devilish humor and technological ingenuity. This groundbreaking interactive 360 experience puts you inside a car with a different Yung Jake sitting in every seat (unless Reggie Watts is sitting there … ), and each time you turn around and look back, you’ll see that a new version of Yung Jake has popped up and taken his place! Download the app and experience even more new Yung Jakes.

The run time is around 4 minutes

Space Explorers: A New Dawn is a live-action documentary about the new age of space exploration will be presented in multiple pods of synchronized Voyager chairs in all New Frontier venues. You’ll witness the lives of NASA astronauts as they navigate the trials and sacrifices of their training and missions, discover the camaraderie of space programs around the world, and gain insight into mankind’s most ambitious journey to understand our planet, our universe, and our origins. This was shot by produced by Felix & Paul Studios.

The run time is around 19 minutes.

One billion years ago, two black holes violently crashed into one another, creating gravitational waves … and music that only recently has been discovered. For the first time, instead of looking at the universe, we are beckoned to listen to it. SPHERES: Songs of Spacetime is a celestial experience that transports you inside a black hole collision to embark on a musical journey that visualizes gravitational waves and provokes a rich contemplation of the human connection to the cosmos.

The run time is around 13 minutes.

The Summation of Force

In a moonlit suburban backyard, two brothers battle one another in an otherworldly game of cricket in this stunning black and white live-action study of the motion, physics, and psychology of sport. Created by photographers Trent Parke and Narelle Autio, in collaboration with filmmaker Matthew Bate, this VR artwork offers a cosmic, darkly beautiful, and dreamlike metaphor for life.

The run time is around 14 minutes.

The Sun Ladies VR live-action documentary brings you face-to-face with a troop of Yazidi women fighters. After ISIS soldiers invaded the Yazidi community of Sinjar, killing all of the men and taking the women and girls as sex slaves, these brave women escaped and started a female-only fighting unit called the Sun Ladies. Together, their goal is to bring back their sisters and protect the honor and dignity of their people.

The run time is around 7 minutes.

Wolves in the Wall (Chapter 1)

Eight-year-old Lucy suspects that wolves live in the walls of her family’s home. She has no one to believe her … but you. Forging a groundbreaking blend of film, theatre, audience agency, and sleight of hand, this exquisitely crafted animated experience casts you as an active performer in a narrative where you interact, have a relationship with, and go on a quest with the central character in ways that leave your mark on the experience.

The run time is around 9 minutes.

In Your Spiritual Temple Sucks live-action comedy, Mr. Chang arrives at his “Spiritual Temple,” a place that represents one’s destiny. To solve his marital crisis and financial problems, he summons his guardian—The Thunder God. First, they try to clean up the mess in the temple, hoping that tidying up will resolve the messy problems in Mr. Chang’s life. But when his wife contemplates having an affair, they decide to renovate the temple from the ground up—which turns out to be a big mistake!

The run time is around 10 minutes.

Understanding Sufism, by its very nature, is experiential. It is a commonly misunderstood branch of Islam that is often typecast as esoteric, mystical, and far outside of mainstream practices. But in many Muslim countries, Sufism is deeply bound to national heritage and other artistic outlets. Zikr enables four people at a time to experience Sufism much as practitioners do in Tunisia and, together, participate in ecstatic music rituals and encounter new spiritual possibilities.

The run time is around 17 minutes.

tags: battlescar chorus dickgirl 3dx Dinner Party dispatch Eyes in the Red Wind Isle of Dogs Behind the Scenes (in Virtual Reality) Masters of the Sun Micro Giants On My Way Space Explorers: A New Dawn Spheres: Songs of Spacetime sundance 2018 sundance film festival sundance vr The Summation of Force The Sun Ladies VR Wolves in the Wall (Chapter 1) Your Spiritual Temple Sucks Zikr: A Sufi Revival
previous Future Lighthouse Closing Down Studio
next This Is What 'Contagion VR: Outbreak' Is All About
Related Posts