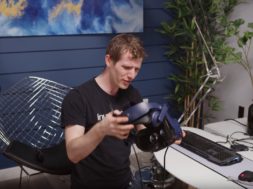 HTC has recently been under heavy scrutiny ever since its release of the Vive Pro headset. Coming in at a whopping $1,1,00 for the Vive Pro bundle, it just isn’t an attractive piece of hardware and HMD that people will buy.

To reaffirm this message, Linus Tech Tips put out a review of their own where they thoroughly inspect this new HMD by HTC. In the video from the get-go, Linus states that he wouldn’t even consider using it over current Vive headset that he has.

The Vive Pro only comes with the headset itself and the wires. In order to fully operate the headset, you will need to shell out the extra dollars for controllers and the base station, which sums up to be around $1,100.

In addition to the price point, Linus lists the other flaws with the Vive Pro headset.

At the end of the video Linus states that it might be a good choice for professional level users but also states, “it really is a bad buy. I would take a Rift or a vanilla Vive over it (Vive Pro) in a minute. I didn’t even pay for this thing and I’m still packing it back up and putting it in the warehouse and patiently waiting for a Vive 2 to arrive.”

It seems that that many members in the community feel the same way and that the Vive Pro just isn’t meant for the daily VR user and is not worth purchasing with the high price tag.