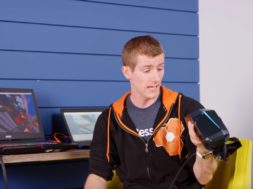 Linus from Linus Tech Tips is a popular YouTuber who reviews the latest tech and gadgets available on today’s market. With his deep insightful knowledge about computer hardware and software, he was invited to try out and review the Pimax 8K headset.

While the headset has been gaining a lot of positive reviews, Linus provided a more transparent opinion about his experience with the VR headset.

At the beginning of the video Linus was quite skeptical of what Pimax promises with the 8K headset. “My BS detector started going off pretty hardcore when I realized that they were calling the two 4K displays, one for each eye, 8K. That is at best, a little misleading.”

After setting up the lighthouses, he put on the headset and got his first glimpse of what Pimax had to offer with their HD displays. “There’s a bit of waviness as you look from one side to another, said Linus. “There’s a little bit of distortion and it is a little bit of motion sickness inducing.” But he was also impressed saying that “The text is incredibly readable compared to anything I’ve tried before.”

Then he proceeded to launch a VR game to test how the Pimax responds within a VR experience. “What I will say right now is that they have got some motion tracking stuff to address,” said Linus. “Some of you can comfortable play VR for over an hour in games like Holopoint, running around jumping… I’ve been in for about 5 minutes so far and I’m already feeling nauseated.”

Linus also mentions that he disagrees with the company as they use CLPL displays over OLED. “It’s common knowledge that OLED responds instantly while the best you can do gray to gray with an LCD is multiple milliseconds.”

Towards the end of the video Linus states that he thinks he’s pin-pointed why he was feeling motion sickness while trying VR on the Pimax 8K. “It seems to mostly be due to the slight distortion effect from the display. Ultimately you’re looking at a flat display through a lens that is stretching it out into your peripheral vision. But it seems to coming from the way the image distorts.”

The headset that Linus demoed was V2 out of V4 that Pimax plans on releasing. This is a pre-production unit and may not reflect the consumer ready version. “Right now, the Rift at $400 with sensors and Touch controllers included is a more seamless experience for sure,” said Linus. But he wouldn’t recommend buying a current gen VR headset.

“With that said, now that I’ve experienced what a next gen resolution display is like in VR I would have a very hard time recommending that you buy a current gen VR experience because the increased immersion from the wider field of view and higher pixel density makes an enormous difference.”

Overall, he thought it was a pretty cool experience even though he feels a little bit nauseated from his short duration using the headset. He believes that there’s a great possibility with the next gen VR headsets such as the Pimax 8K that he demoed.