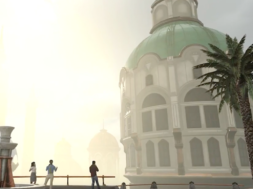 The company has been hard at work in developing Sansar where they’ve applied 14 years of knowledge into the new virtual world. On the platform, creators can host their own virtual space for friends and other users to come hang out and visit. Sansar will be linear to where other people can access multiple spaces by browsing their atlas map.

One of the key differences between Sansar and Second Life is that Sansar will have its own entry points. Users will not have to enter through a singular entry point but rather have the option to choose where they want to enter the space from.

Sansar has been operating behind closed doors for several months now but Linden Labs has chose to open it up to the public for open beta today. The experience is supported on Oculus Rift, HTC Vive, and Windows PCs.

The pricing model may not be final as Sansar is only in Beta stages. You’ll also be able to purchase and sell items created by content creators in the virtual world.