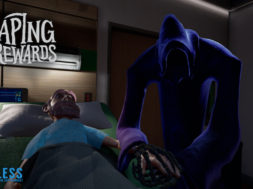 Today, Limitless VR has released the first ever VR animated interactive short-film prototyped and animated within a VR environment called Reaping Rewards on Steam. Using the Limitless VR Creative Environment and intuitive VR motion controllers, users will be able to create their own unique scenes within the story.

“Reaping Rewards” takes the VR viewer through a series of emotional choices as a young Grim Reaper in training, and explores life and death from multiple perspectives. The interactive VR experience was directed by Matthew Ward (Bungie, Imagemovers Digital, Lucasfilm) and produced by Limitless Ltd. Original music for the film was written and performed by Glen Phillips (Toad the Wet Sprocket).

In the video above you can see how the Grim Reaper can be manipulated to take certain actions. With the creative tool suite, users have the ability to create many different stories.

“’Reaping Rewards’ is the first VR project that shows how to use our interactive VR platform to quickly iterate and prototype directly in VR,” said Tom Sanocki, founder and CEO of Limitless Ltd.  “For this showcase experience we wanted to push the boundaries of emotional connection in VR, and Matt’s story was a perfect fit. ‘Reaping Rewards’ is so different from anything we’ve seen yet in VR, and it’s been a great example of how our platform creates exceptional gains in efficiency and ease of use.”

Limitless first showcased their Limitless VR Creative Environment in 2016 with the release of an interactive film called Gary the Gull. This particular VR title allowed you to interact with the main VR character, Gary the Gull through human voice, gestures, gaze, and more.

Last Quarter, Limitless has partnered up with High Fidelity, a 3D virtual world creation platform founded by the creator of Second Life, Philip Rosedale. Under the agreement, Limitless technology enable users of High Fidelity’s open source software toolset the ability to create their own interactive characters within the High Fidelity VR world. The Limitless Creative VR Environment is initially being targeted to film and game developers, as well as to other vertical markets including education, advertising, and travel.