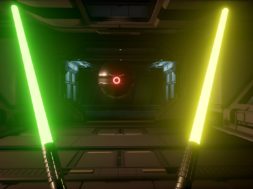 Everyone, don’t panic… Star Wars: The Last Jedi is only a a few weeks away. Starting December 14th, moviegoers and fans of the Star Wars franchise will be able to see the new film in all its glory. To quench your thirst until then, we wanted to provide you with a few notable games that allows you to wield a lightsaber in your hand in VR and AR.

Lightblade VR was originally released last year in May on the Steam marketplace. The VR experience provides an immersive training simulation where you get to wield a self-illuminated plasms blade. Users will be able to slash, dash, and battle against foes who are looking to get a little piece of you.

In the video above you can see how the game works. You’ll be able to dual-wield lightsabers and fight in remote terrain against “sith” looking characters.

Robo Recall by Epic Games has been one of the coolest VR games to release this year. Considered one of the first AAA VR titles, Robo Recall is customizable with mods that allow you to do all sorts of things, which includes wielding a lightsaber. With the use of this mod, players will be able to dual-wield these plasma beam swords to take down the evil robots.

In the video above, you can how the player uses the weapon which includes throwing it at your opponents. The lightsaber will also allow you to deflect oncoming laser beams shot from the enemy robots. Make sure to try it this mod as it’s actually pretty fun.

Ah, good ol’ Trials on Tatooine. This VR experience is quite entertaining to say the least. Created by ILMxLAB, you’ll be commencing your Jedi training on the desert planet. While repairing the Millenium Falcon, you’ll have to defend your point from oncoming Imperial Stormtroopers with the use of your lightsaber.

The experience itself is quite short but can definitely quench your thirst prior to the release of Star Wars: The Last Jedi. Also, did we mention it’s free for Vive users?

Super Trainer VR is a composition of many short VR games which includes 6 unique experiences. The one we’re looking at is called Light Blade Assault. In this VR experience, you’ll be using your light blades to defned yourself from shooting soldiers, mechanic spiders, robotic ninjas, and killer drones. You’ll also be able to slow down time.

In the video above, you can see how you’ll be able to dual-wield the lightsabers to defend yourself from oncoming enemies. It may be worth a look.

Hopefully, some of these lightsaber VR games can provide a bit of entertainment prior to watching Star Wars: The Last Jedi.

Star Wars: Droid Repair Bay – Astro-mechanic for the Resistance will be introducing yet-unseen droids to the Star Wars universe created specifically for ILMxLAB’s virtual reality story, each with their own unique personalities.

To put the cherry on top, Star Wars: Droid Repair Bay – Astro-mechanic will be free for all Vive and Gear VR users starting December 6th. That’s right, you’ll be able to work on droids in the Star Wars universe in VR.