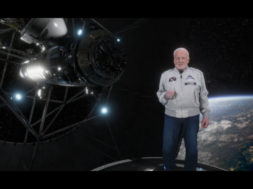 Space is the next frontier for human kind where we must become pioneers once again to inhabit foreign worlds. And as we get prepared for our interplanetary mission to Mars, we must become familiar with the foreign planet. So, 8i and TIME’s LIFE VR have released a collaborated effort called Buzz Aldrin: Cycling Pathways to Mars. In this VR experience you’ll meet the famous astronaut, Buzz Aldrin, in a hologram form where he takes you through a quick journey through space.

For those of you that aren’t familiar with Buzz Aldrin, he is an American engineer and former astronaut at NASA. Aldrin was the Lunar Module Pilot aboard Apollo 11 where he, along with Neil Armstrong, became the first human beings to walk on the Moon in 1969. And while it was a historic achievement, Buzz Aldrin wants his legacy to include laying the groundwork for a permanent human settlement on Mars.

So in this educational VR experience, you’ll see Buzz Aldrin take you from his landing site on the moon, all the way to Mars. He will be showing you first hand on his plans for inhabiting Mars.

In order to create Buzz Aldrin’s hologram, the former astronaut was recorded using “volumetric capture and proprietary technology that brings photorealistic holograms of humans into virtual, augmented, and mixed reality in an easy and scalable way,” according to 8i.

The environment was also created by 8i in collaboration with Loot. Once inside the Buzz Aldrin: Cycling Pathways to Mars educational VR experience, you’ll discover stunning visual effects from FuseFX. This release is free and appropriate for all ages. The production of the experience was created by 8i, in partnership with Soylent.

You can download the experience today on the Viveport, through the LIFE VR app. There were some recent updates done, which will enhance the immersive experience overall.