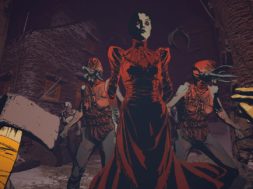 The studio is behind some great VR titles such as Gunheart and Robo Recall: Unplugged. Lies Beneath is a survival horror game inspired by the likes of Resident Evil and Silent Hill, Lies Beneath stands out amongst the rest with its Japanese horror comic-inspired art style.

“Games like Silent Hill and the Resident Evil series were huge early influences for the gameplay. We loved how these types of games blend a master class in creepy mood setting, punctuated with terrifying action sequences that challenge and surprise you over and over. In terms of the world we’ve built, it pretty obviously draws inspiration from the comic world. I think of it as a kind of a cheeky mid-century American Creepfest, mixed with profoundly disturbing Junji Ito-style Japanese horror comic weirdness,” said Brian Murphy, Drifter Entertainment.

Something’s gone horribly wrong in the sleepy town of Slumber, Alaska. Now, returning college student Mae must fight to save her father (and her sanity) from the terrifying townsfolk and creepy creatures infecting her hometown.

Players will experience a living comic book full of frightful scenarios as you uncover the secrets of Slumber… and Mae’s past. With a full arsenal of melee and ranged weapons, Mae will fight monsters across the menacing remnants of her hometown.

Along the way, she’ll need to solve puzzles in her surroundings and find lore objects that uncover hidden truths. Lies Beneath features several difficulty levels and comfort options so you can tailor the experience to your preferences.

Lies Beneath features several difficulty levels and comfort options so you can tailor the experience to your preferences.

The studio is aiming for a release date of March 31st for the Quest and the Rift platform on April 14th. The style of graphics is rather different than most horror VR games today. It has those comic book action verbs pop up when you take action to make things a little more spicy.