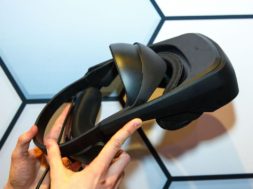 LG hasn’t provided too many updates about their upcoming VR headset since the initial showcasing earlier this year at GDC 2017. But recently, through an application they submitted to the EUIPO, we have learned that they are naming the upcoming headset, the UltraGear.

The application description for their trademark provides a list of products for which the name may be used including the listing of virtual reality headsets, and head-mounted video displays (HMD). This indicates that LG is getting close to unveiling their upcoming VR headset.

When you glance over the VR headset itself, it’s quite esthetically pleasing with curves that look solid. You’ll notice little dots on the front of the headset, which we believe it to be sensor oriented. The top of the headset features a bulge for your forehead placement. It’s similar to PS VR’s design in that manner.

The LG VR controllers look similar to the Vive controllers where they have a wand type of look. At the front tip of the controller, you’ll find divots for sensor tracking. There is a gaping hole in the middle as well. But instead of a nice circular look, LG has designed the controller to be a bit angular.

You have the track pad in a similar location to the Vive controller along with the top button placement. But instead of having one singular button above and below the track pad, it’s two buttons at the top. Additionally, you’ll find the action trigger below the controller.

As far as the base station goes, LG will use Valve’s new Lighthouse base stations which emits lasers to sweep the room. Make sure to stay tuned as we reveal the upcoming release date of the LG Ultragear VR headset.