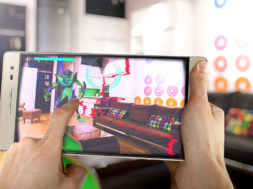 Lenovo has just become the first company to commercially integrate Google’s augmented reality technology called Google Tango for their phones. With the release of Lenovo’s Phab 2 Pro, people now have the option to buy a smartphone that’s dedicated in bringing augmented reality to life for $499. And the devices are available today for order.

“Tango technology will allow customers to see how their home improvement visions translate into reality like never before,” said Richard Maltsbarger, Lowe’s Chief Development Officer. “By bringing the Phab 2 Pro to Lowe’s, we want to empower customers with a tool to help them design, start, and complete their home improvement projects with confidence.” So whether you’re considering a new kitchen or a just a new stove, you can see exactly how it will look and fit in your space before committing to any purchases.

The Phab 2 Pro features 4 cameras that makes AR possible on the smartphone. The cameras on the back are consisted of a 16 MP camera, a depth camera, and a fisheye camera for wide panoramic angles. The camera in the front is an 8 MP camera for selfies and video chats.

The screen size on the Phab 2 Pro is 6.4” with a Quad HD display. The screen itself is made from Gorilla Glass that’s known to be a little tougher from conventional glass.

The Phab 2 Pro will also be the first ever smartphone to feature a Dolby Audio Capture 5.1 system which provides higher quality in sound. There’ll be 3 built-in mics to capture audio and 360-degree noise cancellation tor remove background noise. The AR ready phone will have the Qualcomm Snapdragon 652 as their processor and feature 64 GB ROM with 4 GB RAM.

But best of all, this particular phone is equipped with 4050 maH battery that’ll keep your phone running for a long time.

Google started the Tango project a couple years ago led by the efforts of Johnny Lee and co. The idea behind it was to create, “A whole new suite of experiences,” according to Johnny Lee, the lead engineer. And the vision is BIG for this application. The Tango team over at Google wants to shift our idea and ways of how we perceive AR through handheld technology. Through the eyes of the camera, we can augment the physical world around us. There are about 35 applications that will be launching with Tango Support for the new Phab 2 Pro.  Here’s 1 application from the entertaining bunch called ‘Crayola Color Blaster’ that uses Google Tango technology on the Phab 2 Pro.

With this powerful technology developed by Google, developers now have the means to create interactive AR applications for games and tools on a smart phone. The video below demonstrates how Tango can be used beyond gaming.

So far, we’ve witnessed one application that’s succeeded using AR technology on a smartphone and that’s Pokemon Go. With the help of Project Tango, we’ll be seeing a wider array of uses and successes coming in the future. Look for many more companies releasing phones equipped with the new Tango technology.