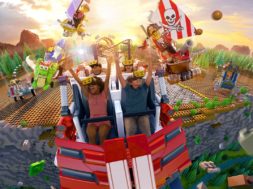 LEGO has been one of those iconic brands that has thrived throughout the years. With their ability to capture the hearts and minds of millions of children worldwide, the company has expanded into many verticals outside of the toy category. They’ve teamed up with famous Hollywood studios to launch their own movies, created movie themed LEGO sets, and even launched their own theme park. But now, LEGO has set their eyes on going virtual by opening up their very first VR roller coaster ride called The Great LEGO Race.

The Great LEGO Race is a one of a kind ride designed for kids. It represents the first time the LEGO brand and minifigures have been integrated with VR technology in a theme park attraction.

About the Great LEGO Race

With animated action taking place on the ground and in the air, the wild and wacky race pits guests against a pirate, wizard, surfer and pharaoh as they steer LEGO-built vehicles like a rocket-powered windsurfing rig, a stylish scooter fueled by espresso and an ornately canopied bed (called a “litter”) carried by mummy servants.

Wearing VR headsets, riders will experience the action from every direction while riding the roller coaster — up, down, forward, backward and all points in between — in a dazzling environment where everything is made of LEGO bricks.

“The Great LEGO Race was inspired by the way kids play with LEGO toys at home,” said Candy Holland, senior creative director for Merlin Magic Making, which designs and develops attractions for Merlin Entertainments sites around the world. “It’s a unique LEGO adventure that lets kids enter an epic imaginary world made entirely from LEGO bricks, featuring a host of different themes and fun LEGO characters, all mixed up together.”

The Great LEGO Race is set to open on March 23, 2018 at their LEGOLAND Florida Resort. The VR app itself was created by MackMedia. You can check out the VR experience today through the app which is available on iOS, Android, and Gear VR.