Learn What Its Like To Fly In VR With Ultrawings

Learn What Its Like To Fly In VR With Ultrawings

Flying used to be a luxury and commodity in most societies. People would take to the air with abundants of room while enjoying premium meals. But in today’s society, it more so has become a nuisance. Yes, planes have become more efficient by squeezing in the most people it can but it’s just not enjoyable or comfortable (unless you’re flying first class). If you’re a big or tall individual you’ll feel the cramp spacing in between seats. You also have to go through strict TSA check points and deal with the long lines. It more or less feels like taking a bus instead of cruising in a really nice car. Commercial flights have lost their magic. 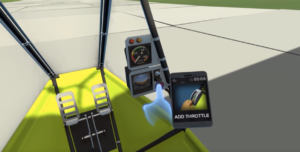 But with Ultrawings in VR you can get that enjoyment of flying again. The game produced by Bitplanet will be the first VR game to have an aerial themed, open world. Yes, you can explore the skies and find new places to see without the restrictions. The game will allow you to adventure in a plane and actually enjoy the ride. Sure it’s not the same thing as flying in real life but you get to enjoy that luxury of flying that the current generation of flying is missing.

In Ultrawings, you’ll be playing the game as a pilot in VR and have the ability to control where you want to go and explore. You’ll be prompted with the motions of flying, landing, maneuvering, and reaching objectives. You might have to get used to the controllers but the game will provide tutorials and hints to help you adapt more easily.

The game will also provide you with little mini-games and courses you can take through the skies. You’ll have to fly through rings that look like hoola hoops and do it in order. The game looks enjoyable and interesting. Updates will soon be coming on its full release and date.

Ultrawings is an exclusive title for the Oculus Rift.