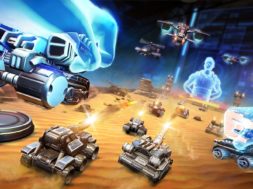 PlayStation has recently unveiled a new game that has made its way over to the PSVR called League of War: VR Arena. This is a futuristic table top VR board game where players must deploy their armies to defeat the opponents.

The goal of the game is to destory the opposing army’s towers and base. Users will have to deploy infantry, tanks, recon, choppers or artillery units. Each of the 5 types of units will occupy a spawn pad where they generate units if they are part of your squad.

Players must strategize quickly as each unit requires time and energy to build. You’ll find that the more powerful units require more energy and take longer to spawn while units such as recon and infantry spawn more quickly.

Units will also off-track each other as they have their own strengths and weaknesses.

League of War: VR Arena is available today for $19.99 on the PlayStation Store. This is quite an exciting PSVR title so make sure to check it out. Let us know your thoughts on the game.