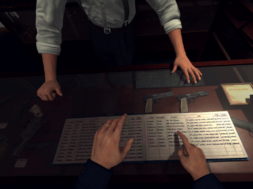 Another hot VR game from a famous publisher will be releasing this week. Rockstar Games has released their new immersive experience called LA Noire: The VR Case Files on HTC Vive. The game is priced at $29.99 and is available on Steam.

For those unfamiliar with the title, LA Noire takes place in the seedy and violent underbelly of 1940’s Los Angeles as decorated veteran and newly minted detective, Cole Phelps investigates an escalating series of cases inspired by real-world crimes.

Each successfully solved case brings Phelps greater success, but also brings him closer to the dark criminal heart of post-war L.A. The game was an Official Selection of the Tribeca Film Festival for its cinematic approach to gameplay and narrative back when it was originally released on the console platform.

In LA Noire: The VR Case Files, users will be placed directly in the shoes of Detective Cole Phelps as you solve brutal crimes, plots, and conspiracies inspired by real cases from 1947 in Los Angeles. During this time, L.A. was a very corrupt town with a lot of violence so users should gear up for some action.

The experience will feature 7 cases specifically rebuilt for VR. The cases will range from Traffic, Arson, Homicide, and more.

You can purchase LA Noire: The VR Case Files today on Steam for $29.99. Again, the game is only available for the HTC Vive currently. Rockstar Games always does a great job with their games and we will be expecting a similar result from the upcoming VR experience.

We will be live-streaming the game tonight so make sure to check out our Facebook, YouTube, and Twitch channels.